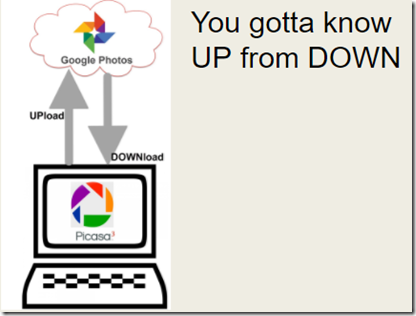 As Geeks on Tour – we do a weekly webcast called “What Does This Button Do?” Episode 132 recorded on 12/17/17, was about Google Photos for Picasa users. You can watch this hour-long episode on YouTube.
If you’re still using Picasa as your only tool for managing your photos, it’s time to get serious about moving to Google Photos in the cloud. Picasa still works, on both Windows and Mac computers, it works today, it will work tomorrow, but you never know when there may be an update that will render it useless. If you buy a new computer, you’re going to have trouble finding the Picasa installation file because it is no longer officially available. We do have a copy of it that is available for our Geeks on Tour members, and you can probably find it elsewhere by searching for “Picasa Installation File.”

The future is in the cloud

The world of technology is all moving to the cloud. Picasa is a computer-based program, Google Photos is cloud-based. Picasa is old, Google Photos is new.  If you take your pictures with a smartphone, the Google Photos app is fully automatic for uploading your photos to your Google account online and making them available to all your devices, including your computers.
But, what about all those old pictures that are still on your computer? Or the ones that you stored on external hard drives or even CDs/DVDs? If you upload them all up to your Google account in the cloud, you will then have your entire lifetime of photos available any time you look at your Google photos. I can tell you, it is thrilling when I can show someone photos of my childhood in Alaska by opening the Google Photos app on my phone and searching for Alaska. Or my wedding photos from 20 years ago, by easily scrolling back to that date. Be careful though, you may lose some friends if you do this every time you see them! But even your most photo-averse friends will appreciate it when you can instantly pull up that picture of them receiving an award 10 years ago.

You don’t need Picasa to move your photos to the cloud – all the photos you see in Picasa are actually on your hard drive and Episode 132, mentioned above showed 2 ways of moving them from your hard drive to your Google Photos account.

If you do have Picasa, and you like the way you have your pictures in folders, you can use Picasa’s Upload command to both upload AND create corresponding albums in Google Photos.

2018 Update: this is no longer available, see Bad News about Picasa … but we were warned

Using Picasa’s Batch Upload feature, you can upload many folders and albums at once 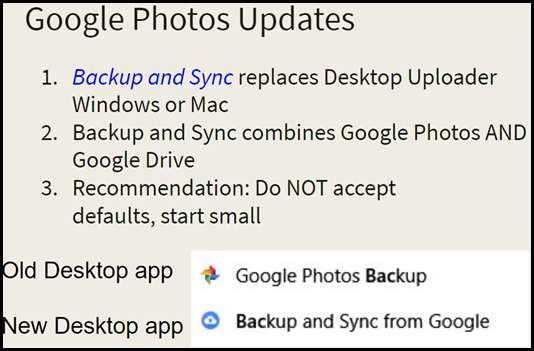 Backup and Sync is software for your computer that will do all the uploading for you. The problems with it are:

If you want to use Backup and Sync, my recommendation is to carefully select the folders you want it to upload. You can select a parent folder and it will upload all photos in any subfolders. So, for example, you could tell Backup and Sync to upload the My Pictures folder, and it will get all the photos within the My Pictures folder structure. Don’t accept the defaults that are to upload all the photos on your entire computer. Then, when the upload is complete, I recommend discontinuing the use of Backup and Sync. From now on, use the “Push” or “Pull” manual techniques above to add miscellaneous sets of photos from your computer to Google Photos. This way, you’re confident that whatever is on your computer is independent, safe, not being synced.
If you are a Google Drive user, that’s a whole different aspect of Backup and Sync. You can set it to synchronize your entire Google Photos library back down to your computer. That will be another lesson! 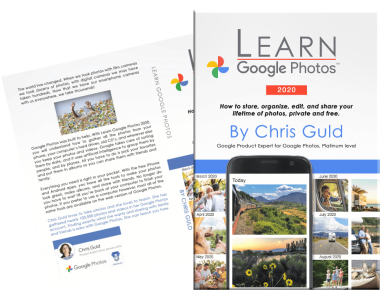